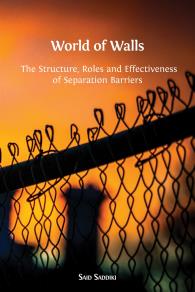 World of Walls: The Structure, Roles and Effectiveness of Separation Barriers

by Said Saddiki
"We’re going to build a wall.”
Borders have been drawn since the beginning of time, but in recent years artificial barriers have become increasingly significant to the political conversation across the world. Donald Trump was elected President of the United States while promising to build a wall on the Mexico border, and in Europe, the international movements of migrants and refugees have sparked fierce discussion about whether and how countries should restrict access to their territory by erecting physical barriers. Virtual walls are also built and crushed at increasing speed. In the post-9/11 era there is a greater danger from so-called "transnational non-state actors”, and computer hacking and cyberterrorism threaten to overwhelm our technological barriers.
In this timely and original book, Said Saddiki scrutinises the physical and virtual walls located in four continents, including Israel, India, the southern EU border, Morocco, and the proposed border wall between Mexico and the US. Saddiki’s detailed analysis explores the tensions between the rise of globalisation, which some have argued will lead to a "borderless world” and "the end of the nation-state”, and the rapid development in recent decades of border control systems.
Saddiki examines both regular and irregular cross-border activities, including the flow of people, goods, ideas, drugs, weapons, capital, and information, and explores the disparities that are reflected by barriers to such activities. He considers the consequences of the construction of physical and virtual walls, including their impact on international relations and the rise of the multi-billion dollar security market.