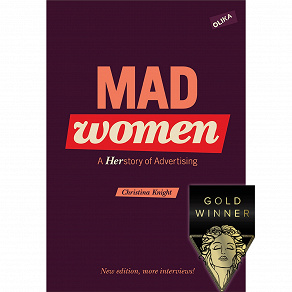 Mad Women - a Herstory of Advertising

"Christina Knight has taken it upon herself to shine a light on thegreatest advertising thinkers, from the incomparable Mary WellsLawrence to legends like Cilla Snowball and Shelly Lazarus, toyoung women in the industry today. She offers inspirationalstories of talent, fortitude and sheer hard work. Women are stillwoefully under-represented in advertising, especially in the seniorroles. This book is packed with 17 reasons why that must change."
PHILIOP THOMAS, CHAIRMAN CANNES LIONS

Meet 17 inspiring ad women who have paved their own way in an industry traditionally defined by “Mad men”. Their experiences and advice on how to make advertising more diverse, inclusive and gender equal is a game changer and something agencies, clients and consumers will benefit from. So, pass the book on and make sure everyone reads it, whether they are an ad student, the art director next to you, your client, your boss or your very best friend.

"This book is a well-needed, empowering and inspirational accountof women s experiences of the ad industry. An industry which fartoo long has lacked the perspective of half of the population; thevery half which to such a large extent represents the consumer.Therefore, everyone who wants to shape our future industry shouldput it on their reading list immediately." MARY WELLS LAWRENCE, CEO & COPYWRITER

Christina Knight has worked in the communications industry for almost 30 years and has throughout her career been a role model by teaching, inspiring and acting as a mentor to young women in this still male-dominated industry. She dares to question and be critical about her own industry. With the book "Mad Women - A Herstory of Advertising", she put the issue on the agenda which led to an annual gender equality survey in the industry, a TED talk and numerous international lectures. Christina's effort and enduring commitment has certainly contributed greatly to change the perception of leadership in the communications industry, an industry that greatly influences the public space in terms of role models, values nd beliefs, not least in a younger generation. Christina Knight is a great role model and well worthy of attention for what she is - a leader.

The first edition was created in cooperation with KOMM! (Swedish Association of Communication Agencies) and is part of the ongoing work for equality.

OLIKA is an award-winning Swedish publishing house working for gender equality and equality.